I bought a Beaglebone Black open embedded processor board about 6 months ago and it has been lying on the dining room table ever since.  Now that the missus went on a holiday to Poland and Slovakia, I finally got around to firing it up to see if it works. 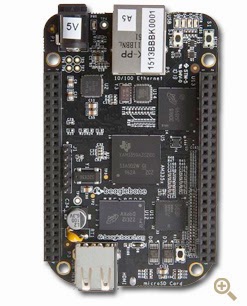 Where to get it

The BBB project is here: http://beagleboard.org/Products/BeagleBone+Black

In the mean time, the Fedora project has released an ARM distribution that includes rudimentary support for the BBB: https://fedoraproject.org/wiki/Architectures/ARM/F20/Installation

First of all, to see if the hardware is OK, I just connected a USB cable to it and started it up with the default Linux version residing on the device and it worked fine.  After installing a USB network driver on my Mac and restarting it, I could SSH to address 192.168.7.2 and poke around in Angstrom Linux.

Unfortunately, Angstrom Linux http://beagleboard.org/latest-images is not well supported - the project is very small with maybe just one or two not very active developers.

Anyhoo, the little board booted up fine, lights flashing merrily and I even got the ethernet port to work with SSH after a few minutes of futzing around with it and then I got the inevitable 'success depression': It works, now what do I do with it?  I cannot use Angstrom, since it is just too limited: No NFS, no SMB, no whatever I could think of.  What can I do with it?

Fedora to the Rescue

When dealing with these little boards, there is always the danger that one can do an update and render the board unbootable.  Therefore, I prefer leaving the original Angstrom system intact and experimenting with the micro SD card instead.

The Fedora project page states:
Support for the BeagleBone Black has been added in Fedora 20. The GA release includes basic support which will be extended to include HDMI and USB with the release of the 3.12 kernel. A remix is planned when support is available. In the interim, the minimal image is recommended.


So there is hope.  Let's get it and try it.  I was out of luck on my Mac, since I don't have zcat on it, so I switched to an older Linux machine with KDE and quickly got everything:
$ cd
$ mkdir BBB
$ cd BBB
$ TYPE=Minimal $ wget http://download.fedoraproject.org/pub/fedora/linux/releases/20/Images/armhfp/Fedora-$TYPE-VFAT-armhfp-20-1-sda.raw.xz

Hmm, now I needed a small SD card and Carrefour had a special with two cards in one package - a small 8GB plus a 32GB.  So 30 minutes later and a few Dirhams poorer - well, nothing is free and few things are cheap - I stuck the SD card into the laptop and copied the image to the base of the SD device:

If you see multiple partitions, then this is probably a used SD card, so it may be best to zap it first:
$ su -
password
# dd if=/dev/zero of=/dev/mmcblk0
and go and get some coffee, or a non-alcoholic beer...

On a Mac, you first have to install xz from here:
http://macpkg.sourceforge.net/

Xz, xzcat and the rest of the zoo will install itself into /usr/local/bin by default.

Popping the SD card out and sticking it back in again, caused an automount in /media with two visible directories called "__" and "uboot".

Now, we are in business!

Stick the little card into the BBB, insert the USB cable to power it and watch the lights.  When the flashing stops after a couple minutes, Fedora is running, but now I need a serial cable to be able to connect to it...

Rummaging through my radio control junk box, I found a Sparkfun 3.3V FTDI USB serial cable https://www.sparkfun.com/products/9717, which is exactly what is needed. 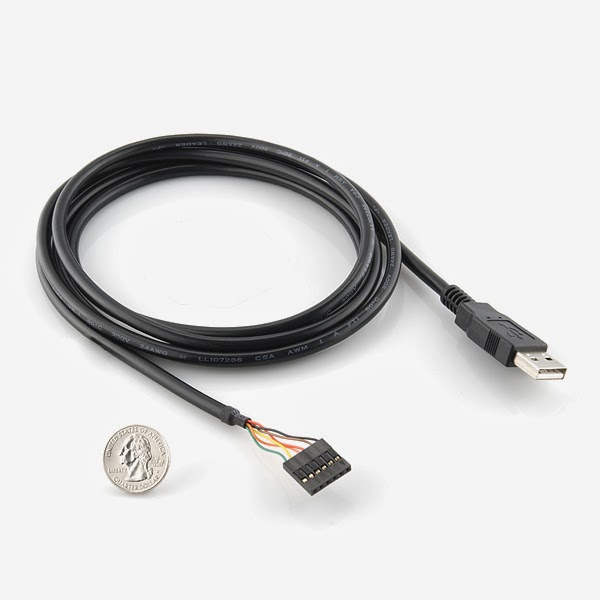 So, unplug the USB power cable, install the serial cable (Black wire at the little dot), plug in both USBs and run screen:
$ screen /dev/ttyUSB0 115200

Fedora on the BBB works and after a few minutes it gets a menu where one can configure the root password, configure a user account and set the time zone.