It appears that there is a relatively new PDF feature to prevent casual copying and saving of a file and that some programs save PDF files with these foolish features active by default.  Many forms from the Canada Revenue Agency are locked in this way, which makes it difficult to do one's taxes, since one can fill the form, but cannot save it.

One can only print the form.  It should be possible to print to a file or export it to a new PDF file, but it is far better to reset the annoying anti-taxpayer flags, since the 'printed' form cannot be edited easily any more and I always manage to make a mistake or three that need to be corrected after review.

If there is a Linux (virtual) machine handy, install qpdf and use it to reset the silly flags:

One doesn't need a password to unlock these flags, so the fix is instant.

Posted by Herman J.H. Oosthuysen at 5:36 AM No comments:

I need to clean out 50 years of cobwebs and dirt from two garages and a shed.  The cobwebs are like a Hollywood horror movie, so one should enter the shed armed with a broom and a shotgun.  A little 1000 Watt home vacuum cleaner would be instantly full, so I disassembled an old one and mounted the parts on top of a big bucket from the Hornbach hardware store, to give the little sucker a fighting chance. All the surplus Covid filter masks also came in handy in the shed while cleaning. 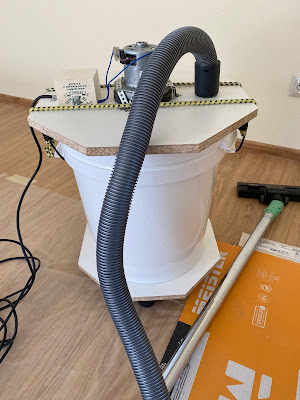 The trick is to use two buckets, one inside another, plus a little glue for extra strength, otherwise the bucket can collapse when the pipe clogs up.

The most difficult part of this project, is to disassemble the old cleaner.  Evil one-time snaps and hidden little screws, may require using a wrecking bar and hack saw to pry the thing apart.

A home vac is a very simple device with essentially just one part - the motor-compressor unit.

The one I took apart also had a triac speed control, so that went into a little box. I turned the speed down just a tad, to reduce the screaming a bit.  I've been wondering whether one could just stick a diode in series with an overpowered universal motor to slow it down to a more acceptable noise level, but that may damp it too much.

The motor is simply held down with three pieces of rigid strapping (a holy metal strip, normally used to tie roof rafters together), on top of the original rubber gasket. Mount a round cartridge air filter (from a large truck engine or another kind of shop vac) under the motor on the inside of the lid.  I again used some rigid strapping, washers and screws.  To clean the filter when the vac doesn't want to suck any more, simply toss it high up into the air in the back garden a few times, when the neighbours are not around. 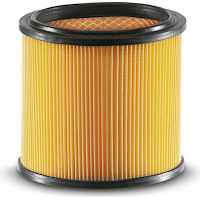 The suction pipe was semi-permanently glued into a hole in the lid with hot glue.  If your old vacuum cleaner still has a functional pipe attachment mechanism, you may be able to re-use that - mine was worn out - the reason the vac was discarded.

Four little dowel sticks locates the lid on the bucket.  You could slit open some rubber tubing for a better seal around the bucket edge, but in my prototype, the smooth MDF board simply presses against the top of the edge of the bucket and it works well enough.  If the motor can dent the bucket when the pipe is blocked with your hand, then it is sufficiently sealed.  If it collapses the bucket, then you need to drill a little 3 to 5 mm hole somewhere!

A bottom MDF board with four castor wheels, rounds out the project.

A vacuum cleaner really works with air flow, not vacuum.  When high speed air from the hose enters the large diameter bucket, it acts like an expansion chamber and the air flow slows down dramatically, causing any dirt to fall to the bottom.  You can keep vacuuming up debris till the bucket is about half full.

There are lots of vortex voodoo videos on Yootoob about making your own shop vacuum cleaner in the most complicated way imaginable.  This however, is for those who like to keep it simple: Just mount everything on the lid of a bucket and be done with it.  For the ultimate lazy, almost never need emptying shop vac, you could mount the compressor on the lid of a 120 litre wheelie garbage bin, but I wanted it a little smaller!

I still want to put a case around the motor, to dampen the noise and maybe use it as a leaf blower, but then I need a removable pipe. I also need to fashion a better hold down than the two bungee cords, but this prototype setup works a treat already.

Posted by Herman J.H. Oosthuysen at 11:46 AM No comments: