How does one build reliable electronic circuits?  By starting with a reliable and clean power supply.

The three terminal linear voltage regulators have been almost obsoleted by three terminal switching regulators.  It is now quite trivial to make a very efficient small power supply by using one of these modules - available from Mouser and Digikey.

I tend to buy interesting parts when I see them and the little bag may lie around in my workshop for years until I find a use for them in some or other widget.  Here is a little 12 Volt switcher circuit which took me about 2 hours to find the parts in the depths of my Junque Bochs, and build on strip board: 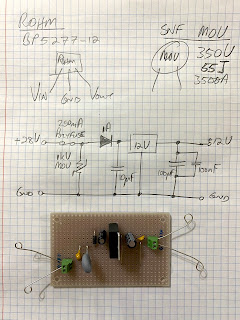 The circuit starts with a self resetting fuse against over current, has a MOV for protection against high voltage spikes, an anti-dumkopf diode, a switching regulator and a couple of electrolitic smoothing capacitors. The big capacitor has a tiny one accross it, to quench high frequency EMI. The two little terminal blocks make for easy wire-up.

The regulator doesn’t need a heat sink, since it is very efficient and won’t get warm.

If you want to use a switcher with a VHF radio receiver, check the noise with an oscilloscope/spectrum analyzer and if necessary, add another little EMI capacitor, or mount it in a separate aluminium enclosure for shielding.

Through hole parts with a double sided circuit board, where the bottom is a ground plane, will ensure low noise operation. It is easy to build and easy to repair if it ever breaks. For vibration and shock, the big parts should get blobs of RTV to hold them.  A quick spray with V66 or similar conformal coating, will protect the parts against corrosion.

That is about it.

Herman
Posted by Herman J.H. Oosthuysen at 6:47 PM No comments:

One can buy solar powered garden lights everywhere now.  They are useful for lighting up a garden path, outside patio, or your Satnogs ground station, but why buy one if you can build it yourself - at much higher cost of course.  If it would be a rational economic decision, then I'll never build anything!

How much current can one get from a small, supposedly 1 Watt, 12 cell solar panel: 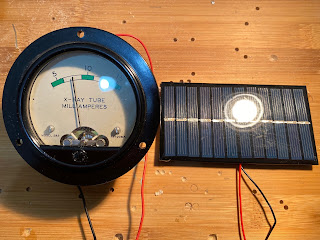 According to my ancient 'X-Ray Tube' meter, about 7 mA under my desk lamp!

If you want to build one yourself, or repair an existing one that failed, here is a little circuit with only about a dozen parts, that should get you going: 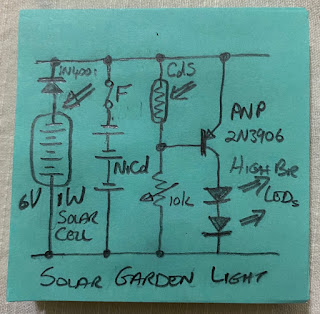 There are a few tricks to this circuit.  Solar cells are diodes, therefore one could simply wire a small solar cell panel across the battery to charge it, but solar cells are also cheaply made and full of flaws, meaning that they are not good quality diodes and will slowly discharge the battery when it is dark.  Therefore it is necessary to add a series blocking diode, to avoid discharging the battery at night. 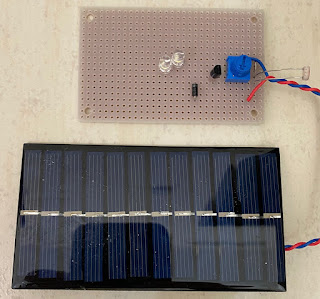 The battery is made of three Nickel Cadmium or Nickel Metal Hydride cells.  These cells can be trickle charged and they are not expensive.  The three cells will slowly charge up to 3.75 V during the day.  Using a tiny 6 V, 1 W solar panel, we don't need a charge control circuit.

NiCd batteries can overheat and catch fire when short circuited, so it is best to put a 150 mA PolyFuse in series with it - a polyfuse is much cheaper than burning your house down.  The PNP transistor is turned on/off with a Cadmium Sulphide photocell.  The level of light/darkness where it triggers is set with a 10k trimmer (depends on the photocell - one I have needs a 22k trim resistor).  Put the photocell out of view of the LEDs, unless you want a solar powered blinky light.

The light source is made of two high brightness LEDs in series (Sparkfun has extremely bright LEDs that will hurt your eyes if you look into it).  The maximum current flow is controlled only by the internal resistance of the batteries, the inefficient transistor and the internal resistance of the LEDs.  This is another reason for the PolyFuse - to limit the maximum current.

Two high brightness red or green LEDs in series, require about 3 V to glow.  This sets the minimum discharge voltage of the battery.  If you discharge a NiCd cell below about 0.9 V, then it will get damaged.

If you want to use a blue or white LED which require 3V or more to glow, then use only one LED.

You can put LEDs in series, but not in parallel.  If you parallel them, the LED with the lowest forward voltage will light up, the other one will stay in a dark mood and sulk in a corner.

The whole circuit can be constructed inside the lid of a glass flask, with the solar panel on top, so now you have a good use for an empty Nescafe coffee powder bottle.  I learned over the years that one should mount a project PCB on the lid of a box using a few nylon/brass stand-offs.  Doing this, makes it much easier to work on the project than when it is way down in the bottom of the box!

You can buy all the parts from an online high tech toy shop such as Jameco http://jameco.com or Sparkfun http://sparkfun.com.

If you want to learn more about real world wind and solar power systems, there is no nonsense Real American Cowboy information at Missouri Wind and Solar: https://mwands.com/wind-turbine-and-solar-panel-faqs

Herman
Posted by Herman J.H. Oosthuysen at 5:07 PM No comments: