Knights Of The Round Table

I did my good deed for the week and rescued an old round/oval table. 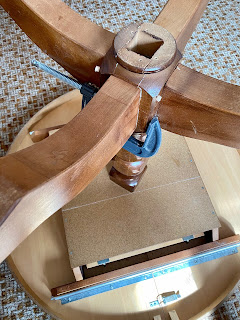 These tables all suffer from the same design flaw, since the factories copy each other and they don't care about it lasting much beyond the show room door.

A table with a central leg will only last if it is made from steel. A wooden table that is light enough that normal human beings can still lift it, will eventually split, due to the enormous leverage from the table edge onto the central leg.

The central leg is made from four planks glued together and then turned on a lathe - which also weakens it.  The four feet, are invisibly bolted through into the hollow.

When a knight in heavy armour leans on the table, the central leg tends to split at the bottom or top.

I wedged the spars open and poured in some white glue and let it run down, while spreading it with a little swizzle stick and wiping up with a damp cloth.  Then I clamped it and drilled four holes for dowel rods (the little white points above the clamp jaws in the picture) - while trying to miss the hidden bolts.

To put an 8 mm dowel into hard wood, requires an 8.1 mm hole if you want to be able to tap it in without splintering the dowel in the process, but where to find such a drill bit?  Not all drill bits are made equal.  I have multiple 8 mm bits and one of them, is ever so slightly bigger than the others, so it performs dowel duty.  With MDF, it is not a problem - you can mash an 8 mm dowel into a 5 mm hole if you have to... 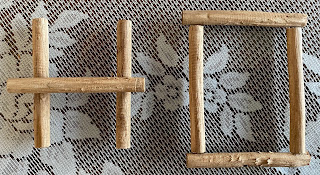 There is not much point in putting too many dowels, since next time a heavyset knight leans on the table, it will break somewhere else!

In a couple days, I'll grind the dowel heads down with a Dremel cutting wheel.

Many/most woodworkers use far too much metal in their projects: Hinges, locks, catches, slides, corner brackets, screws and nails...

These widgets are very expensive and in most cases not necessary.  One can make everything just with wood and glue, even hinges and locks.  You can start by eliminating screws and nails by using wooden pins.  The cost of your projects will reduce dramatically when you avoid using steel and brass fittings and the resulting projects will look rather nicer/olde fashioned/rustic.

A simple assembly trick is to glue and screw a thing together, then remove the screws one at a time, enlarge the hole and tap in a dowel with glue and a rubber mallet.  With an electric screwdriver and drill, this is super quick.

I found that the best way to make dowel pins is to buy ready made ones!  Alternatively, cut 9 mm oak strips with a jigsaw from a scrap block (about 3 inches long works for me), round them a bit with a knife, then hammer them through an 8 mm hole in a steel plate.  I use an old rafter joint bracket which has multiple holes already, clamped in a vice.  A humble washer mounted on a backing block will also work.

There are many videos on Yootoob showing how people make dowels using a drill and various kinds of cutting widgets.  In my experience, this only works with very thick dowels, at least 10 mm diameter.  Thin stock tends to shatter.  Simply turning a dowel in the serrated jaws of a vice works very well, since one can adjust the vice until the dowel is the right size.

Hammering a square peg through a round hole even works when there is a little knot in the peg.  You just get a bent dowel, as the one in the bottom right of the picture, while with a drill lathe turning method, it will shatter at the knot.

You don't have to sand a dowel smooth - you are going to hammer it into a hole with glue - the roughness will help to fasten it.  I cut and hammer a double handful of pegs and then I can put a project together without nails, screws or weird brackets.

One way to prevent repeated breakage of a round table, is to loosen the table top (back some screws out a quarter inch), so that it is balanced precariously and if anyone would lean on the table, then it will wobble threateningly and teach them not to, by spilling their hot coffee into their laps, but this particular extendable table design unfortunately doesn't lend itself to such an evil solution.

Posted by Herman J.H. Oosthuysen at 10:34 AM No comments:

Do you still remember what an Office is? Those large multistorey buildings where we all used to fearlessly share our cold and flu viruses like a big happy family?
The Book on a lectern where you sign in/out, with The Witch glaring at you for being ten seconds late, whether your nails are clean and your shirt tucked in.  The front desks that are slightly bigger, with a better quality desk lamp and which may even have a carpet!  The CARDEX cards along the wall, the clattering Telex machine at the back...

It is interesting to note how the desks get gradually more messed up towards the rear of the room.  That is always where the real work gets done.

Posted by Herman J.H. Oosthuysen at 8:43 AM No comments: