#3: Kali Linux on the Beaglebone Black

I tried Fedora on the BBB, but it is slightly behind the curve (strange for Fedora, which is usually bleeding edge), the ethernet and USB ports do not work yet since it needs a newer kernel.  The Debian distributions are better on the BBB.

So, one can blow against the wind, or try Debian... 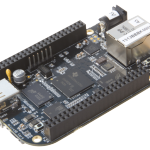 I am working on a networked project which is an island system - it is not connected to anything else at the moment.  I say at the moment - since I know that sooner or later, the bosses will demand that it be connected to the something else, at which point the lack of attention to security will come to bite everyone.

There is a small security and penetration test oriented Debian based distribution called Kali Linux that you can get here http://docs.kali.org/armel-armhf/install-kali-arm-on-a-beaglebone-black

Kali installs on a SD card, so your original Angstrom Linux on the BBB will remain unaltered, which makes it worth a try.

An interesting feature of Kali, is the website, which was nicely translated into 13 languages.

With this version, you should be able to do various nefarious things to your fellow developers using the Metasploit package...

Get it and Prepare an SD Card

You can download the ARM HF image here http://www.kali.org/downloads/

Uncompress it with xzcat:
(For a Mac, get the xz utilities here: http://macpkg.sourceforge.net/)

Using Data Definition on a Mac

Only now, stick the SD card into the Mac SD slot.

The disk0 is your SSD and you don't want to mess with that!
The disk1 is the SD card.

On a Mac, Ctrl-T will show the dd progress.

Note that if you accidentally dd to /dev/disk0, then you will destroy your Mac system.
So, don't do that!

Accessing the SD card from a Virtual Machine

I run Fedora 20 on my Macbook Pro and getting Virtualbox to see the SD card is somewhat painful.

First of all make sure that the Fedora virtual machine is NOT running.

Stop the automounter as above to ensure that the SD card is not mounted, then access it using a raw disk image.


Attach the raw disk to a guest VM within the VirtualBox UI:
Now you can use the Fedora VM to access the SD card normally and finally, when done, you can re-enable the automounter using kill -SIGCONT.

Hmm... now I'm wondering whether the mods on the Fedora BBB page are required here too:
$ cd /media

Soooo, remove the USB power cable, remove the SD card and stick it into the Mac.
Aaaargh! Stupid automounter and stupid Mac that doesn't support the file system...

Boot a Linux machine and stick it in again.

An error occurred while accessing DEBIAN_LIVE...

Bah, humbug!  No wonder it won't boot either.

It really looks like it is time to find another distro again, or to build the darn thing myself.

If you are more adventurous, the Kali build scripts are on github here https://github.com/offensive-security/kali-arm-build-scripts

Get bbb.sh and README.md for the details.

I think I'll rather install QEMU and build my own version of Fedora ARM, since that is the distribution I like the most.   More on this later.