I like tinkering with wire antenna designs, since they are simple and cheap to make.  Mr Yagi invented his antenna about 100 years ago, but there are still some things left to learn about it.

The 900 MHz ISM band ranges from 902 to 928 MHz.  Covering the whole band with a single Yagi antenna is difficult, since they are inherently narrow band devices.  Consequently some tweaking is required and the result below is a desensitized design that can be built and replicated quite easily, but you need a network analyzer - "To Measure, is to Know!"

A Yagi generally consists of a Reflector, Radiator and one or more Director elements, arranged on a boom.  For a small Yagi, a wooden ruler works a treat, since one can easily mark the position of the wires.  The wire elements are fastened to the bottom of the ruler with hot glue.  The wire elements are  made from straightened out jumbo size paper clips.  The balun, is two clip-on Ferrites, to prevent current flowing on the sleeve of the co-ax, disrupting the pattern.  Winding a ferrite bobbin balun, is not quite worth the hassle to me.

You can plot the pattern of a Yagi with NEC2, but NEC2 does not provide accurate impedance, or VSWR plots and the simulation operating frequency will be lower by about 4% as well, because NEC2 does not automatically compensate for the end effects of the wire rods - you need to add a load card with a tiny capacitor (0.01 to 0.1 pF) for each element end.  For serious Yagi design, you probably need to consider NEC4 or FECO, but if you are aware of the 3 to 4% systematic errors of NEC2, then it doesn't matter, so I never could be bothered to actually buy NEC4!

There are many Yagi antenna tables and calculators on the wild wild web.  I used an Optimized Wide Bandwidth Array (OWA) design, with the first reflector very close (~0.05 Lambda) to the dipole:

Make the folded dipole of a length between the reflector and the director and then tweak it till it is reasonably well tuned to the frequency you want.

Several rules of thumb have been developed over the decades and if whatever online design calculator or tables you use differs much from the below rules, then you should be suspicious: 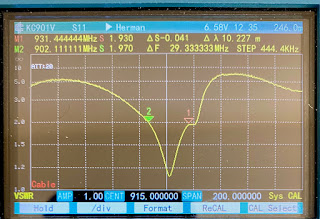 A Yagi tends to be a sensitive and narrow band antenna with low impedance.  This can be improved with the following suggestions: 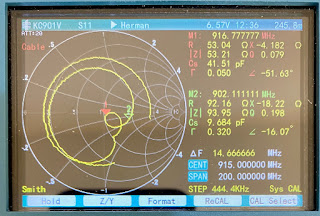 Tuning a Yagi is an art, not a science!

In general, one designs an antenna for the top of the band (930 MHz) and then it will end up lower down towards the middle of the band, due to parasitic effects from the boom, the coaxial cable and things around it.

Tweaking the antenna is quite tricky and requires some patience, but it can be a lot of fun:
Note that since Lambda = 1/(2.pi.f), if your frequency is low by 1%, then you need to trim the length of the elements by 2%, or trim 1% off at each end of the element.  Since the design should not be very far off (unless you used a really dreadful design tool) and the directors will be bent later, only trim the dipole.

The measured impedance of this little Yagi is 53 Ohm to 92 Ohm, meaning that one can use a garden variety RG59 or RG58 co-axial cable to drive it directly and avoid using a power sapping trans-match.

If you feel that the impedance is too high for RG58, then you can make a somewhat unconventional dipole with only one folded leg, which is inherently unbalanced and therefore a better match for a coaxial cable.

How to measure the gain of an antenna by pulling yourself up by your boot straps, starting from first principles:
Make two simple dipole antennas - two pieces of wire and a toroid balun each.  Measure the power received over 1 meter distance between them.  Replace one antenna with your antenna under test and measure again.  The difference is the gain of the antenna in dBd (dB relative to a dipole).  For dBi, add 2.2 dB, the gain of a dipole.  Once you have characterized one directional antenna, you can then use that one for measurements of other antennas.