As far as Microsoft operating systems go - if you can call them that - I have used practically every version of everything O'l Billybob ever made.  I even once received a cheque from Microsoft for one of their infamous illegal business practices lawsuits that they lost (Corel, Novel, Lotus, DEC, SAMBA, SCO, Stacker, Trumpet, Sierra...).  So I have a kind of love/hate relationship with MS and avoid their products wherever possible, since they can destroy a computer business competitor without batting an eye and leopards never change their spots.

If it is Free, Take Two!

You can download a Windows 10 ISO file for free here:
https://insider.windows.com/ 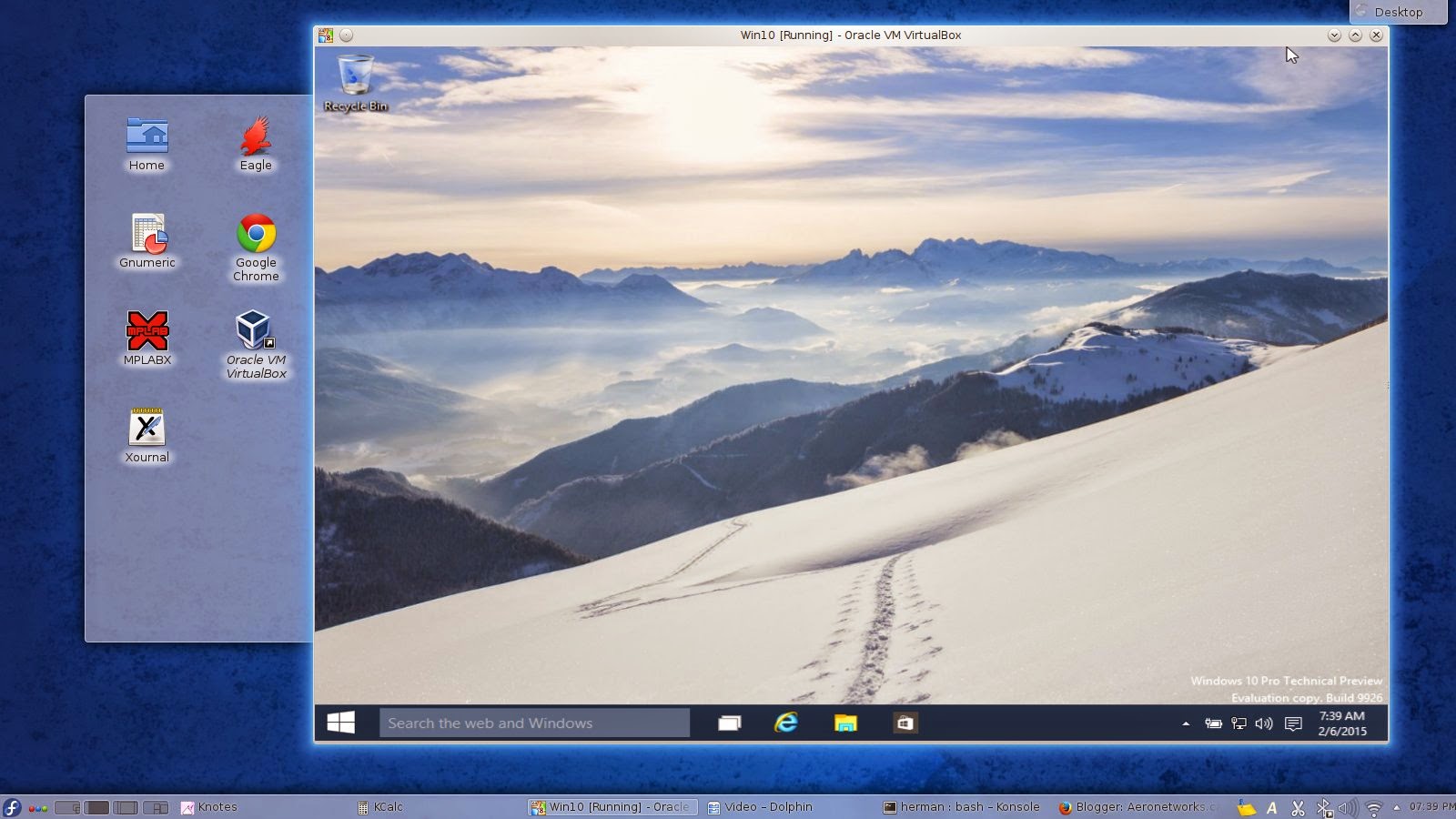 Windows 10 Running in a Window on Fedora Linux KDE

After downloading the thing (4.9 GB), run Virtualbox and create a "Windows 8.1, 64 bit" disk.  Select the ISO file in the Storage, CDROM widget and boot up.

If you cannot create a 64 bit VM with Virtualbox, then the Intel Virtualization features are turned off in the PC BIOS.  Reboot and fix that first.  The setting is usually not in the CPU tab as one would expect, but hidden somewhere else in the BIOS settings - you'll need to click around to find it.

The Win 8.1 64 trick above is the main reason I'm writing this, to save you from a Blue Screen of Death Error 5D.

Turn power management off, since your host already does that, install Virtualbox Guest Additions, enable file sharing and once everything is working right, disable the network, since that is the only way to keep a Windows machine secure.

Now please don't blame me for all the problems you may get with Windows...

Some people got it to work, but not I.  The 64 bit version of the Virtualbox guest additions runs and installs with no complaints, except that it doesn't actually work - sigh...

The main reason for using Guest Additions is the easy disk sharing with the host, but there is a way around that, which should be almost as easy.  Run a FTP server on the host (vsftpd for example) and then use the easy connect wizard in the Windows file browser (File, Map Network Drive, Map as Drive, Connect to a website..., Next, Choose...) to connect to the server using a URL like ftp://192.168.1.10 which will create a shortcut in the left pane which then works like a network file share - it will ask for your user name and password when required.  At least, that is the idea anyway.

However, I then run into some weird file access permission problems.  I can copy a file somewhere else, but I cannot open the file in place with an application, so it looks like I get read only access.  Access works perfectly with FileZilla, so it is a Windows Explorer problem, not a FTP server problem.

I heard on the grapevine that Windows 10 finally would support SSH as well, but it doesn't look like it.  A ssh:// type of URL fails.  Only FTP and WebDAV seems to be supported, same as before.  So Windows is still a pain in the derrier for engineering use.

The default out of the box Win10 is a round and fat prasatka.  It is very slow compared to WinXP, Linux or Mac.  A VM backup tarball clocks in at 6.5 GB compressed - five times bigger than a typical Linux VM.  So everything and its dog is installed by default, yet, as always, Windows doesn't actually have any useful applications by default.  What the heck they do with all those gigabytes, is a mystery.

One reason I am experimenting with this fat piece of jello, is because I have to get MS Office 2013 to work and it requires Windows 8 or better.  However, it is so dog slow in Virtualbox, that MS Word is almost unusable, and I need to get the FTP server access above to work also.

To say that Microsoft doesn't take security seriously, is an understatement of mind boggling proportions.

One reason why I run Win10 on Virtualbox, is to allow me to easily firewall all the built-in spyware.   The creepy doll Cortana, listens to everything you say, your search keystrokes are sent to Microsoft Bing and if you would use Bitlocker, then the key will also be backed up to CloudDrive for easy access by the NSA, FSB, GCHQ and other hackers and mafiosi.

Once you got it to work properly, then you should run the VM with host only networking, or go into the advanced firewall rules and block most things in the incoming and outgoing rules. The speed improvement from turning things off and blocking them in the firewall to make double sure, is quite amazing.

I ran the Settings Wizard and turned the fat creepy doll Cortana, Bing Search, the App Shops, Help, Support, Feedback, Remote everything, Skype, Games, Xbox and everything else that looked remotely useless OFF - most everything in other words.  After that - and rebooting of course - it seems to work even faster than my specially hacked Win7 VM and all pop up advertisements and other cruft are blissfully gone.  It is still very much slower than a WinXP VM though.

After my latest round of blocking and disabling cruft, MS Word launches and opens documents in the blink of a lazy eye.  So the default settings of Win10 are really awful.

There are a few annoyances that I noticed already.  The menu system is a kind of self indexing database and has a limitation that is set too low.  It tends to pick up all kinds of cruft and you may find that a newly installed program won't show up in the menu and if it doesn't show in the menu, then you cannot search for it either, since search uses the same broken database.  I'll install Classic Shell and see how that goes.

Ditto with large folders.  I mapped a disk from the host system over FTP and large directories failed to show up in the file explorer.  I don't know what the limitation is, but one of these has 6700 files and is 32GB in size.  I can access it just fine from FileZilla though.  These missing folders eventually showed up - WTF?  It must be indexing things before showing it - another speed sapping service that I need to find and strangle.

Applications also seem to get only read access to mapped FTP folders.  I can use Notepad to open a file on the host from its File, Open menu, but cannot save it back to the host.  I have to save it somewhere else and use the file explorer or FileZilla to copy it back.  Also, if I double click a file in a mapped folder, it runs the relevant application, asks for username and password, and then tells me that it cannot open the file - grrr...

Ordinary mortals will probably never run into these issues, but Windows is clearly still not good for Engineering use and feels a bit buggy like Windows ME.

Some searching on MS Technet showed that the FTP authentication bug has been in Windows since 2007.  It is now so old that the published workarounds don't work anymore.  In essence, Win7/8/10 only work properly with Anonymous FTP servers.

So, what I have to try next is to set vsftpd to anonymous on my home directory and block it with iptables so it is not open to the wild wild world and then try again.

Now to find a happy middle ground between Windows bugs and Linux bugs.  The vsftpd server chown function doesn't work in the version I got running, so I have to set all directories that I want to share to world read/write and sticky.  The world read/write allows the ftp user to put a file there and the sticky bit forces the group to the owner of the directory, so I end up with ownership of herman:ftp.

Restart with the command service vsftpd restart and now finally, Windows 10 can read, write, edit and save properly to the anonymous FTP server, same as with a Virtualbox Guest Additions shared folder.

Battening Down the Hatches

When my computer is doing nothing, I prefer that it does exactly that - nothing.  It should not connect to any servers on the wild wild web behind my back.

For starters, you could block DNS requests for Microsoft servers, which will make outgoing connections fail, by loading the below hosts file into Windows/System32/drivers/etc:

Why on earth Microsoft thought it wise to make Win10 connect to 39(!???) servers without asking,  behind my back, is just mind blowing.  I can understand the need for DNS, NTP and updates, but the rest?  They just have absolutely no clue about network security.

To edit the hosts file, right click on notepad in the Accessories menu and select run as administrator, then open the file C:\Windows\System32\Drivers\etc\hosts

If you want to block advertisements and junkware also, see this site:
http://winhelp2002.mvps.org/hosts.htm

Combine the above into a single hosts file.  If you then sit and stare at the output from tcpdump, the network connection should be nice and quiet:
# tcpdump -A -i eth0

If you still spot something, simply add it.

If you get troubled by the system not accepting your registration code, get a copy of 'unlocker' from 'majorgeeks.com'.  Reactivate with 'slmgr /rearm', then using 'unlocker', find *all* copies of 'slui.exe' (there may be two or three!) and delete them.  Finally, reboot.