The first step is just to be sure everything runs.

Plug the computer into the USB port of the AP.  Enable the FTDI USB device in the Windows VM.  The AP should power up like a Yuletide tree.  Let it go online and download the latest AP firmware.

If you carry your whole setup (minus the main wing) into your garden and if you have WiFi access out there, then the GPS, magnetometer and gyros should activate and after a while you should see your location on the map and wherever you went, that is where you are. 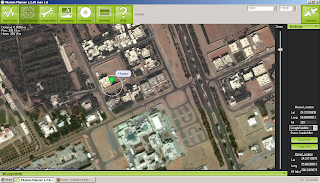 If you live in a desert like me, then you may not want to stay out there too long, but most people could carry on doing the rest of the tests on a patio table - all you need is power, WiFi and coffee.

So now you can see where that is going - either you need to pair a smart phone with your laptop PC or get a cell phone data modem of sorts for use out at the airfield.  This isn't a cheap hobby.

Initially, you need to fly and land the plane manually and will only engage the AP for brief periods till you are sure that it is calibrated right and won't flip the plane over, or fly away into the sunset, so the override switch on IN 8 on the AP is all important.

On my system, Manual is in the Up position.

Ensure that the plane is tied down securely.  It is also advisable to remove the propellor for the very first test.
Nothing else should happen.

If they move the wrong way, then reverse the action in the transmitter setup and save it for your model name.  Any half decent transmitter can save the setup for multiple models.

If nothing happens, flip the Manual Override switch (Flaps on right) and try again.  Once working, mark the Manual position clearly.  On my system, Manual is in the Up position.

Now, check that there are no papers lying about and briefly try to run the motor a little bit with the left hand throttle lever.  (I once had the prop on and it tried to empty a box of tissues for me, which was rather spectacular).

If you see smoke, well, then you can see exactly what is wrong.

If all is well, then you should run the motor at half throttle while monitoring the battery and time how long it takes to run down.

The Tornado 3400 NiMH battery performance is interesting.  I wired a multi-meter to the battery and played with the system on the bench:
Therefore, with careful motor use, it appears that the system can safely run for 20 minutes.  Just gliding, the system can run for a very long time and with the motor off, the electronics can safely keep running on a flat battery and glide home.

During this half hour of testing, the transmitter battery went from 11.1V to 10.3V.

During the above tests, I noticed that the transmitter interfered with my Kindle WiFi connection and my online Prague Radio Gothic reception would drop out annoyingly (Abu Dhabi Classic is the strongest radio signal in Al Ain and that gets really tiring after a few years...).  Although the RC system kept working, it is probably a good idea not to use WiFi or Bluetooth devices while flying.

Once the whole system is under control, you can mount the propellor and go and fly the plane to set the trim values on the transmitter.  After that, you can calibrate the AP https://code.google.com/p/ardupilot-mega/wiki/RCSetup


Time for some nealkohol pivo...

Email ThisBlogThis!Share to TwitterShare to FacebookShare to Pinterest
Labels: UAV