We planted a new tree and wanted to stabilize it with three posts, so it won't blow over in a storm, while it is still young.  It turned out that planting the tree was the easy part.  Hammering the 2.5 meter support posts into the ground, was a whole 'nuther problem. 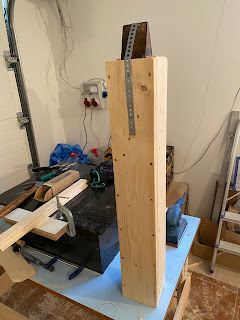 One cannot use a sledge hammer on a tall post, since climbing onto a ladder and swinging a heavy weight around, two meters above ground, is sure to cause a rapid, unplanned descent from the ladder.

The safe solution is a pile driver - a heavy pipe that is closed at one end.

I could not find a pile driver at the local hardware store and in any case it would cost around 65 Euro, so I took some scrap wood and a two hundred year old sledge hammer and there we go.  The only expense was a handful of screws.

The thumper works remarkably well.  It took longer to make the thumper than to set the three posts, but now I can also use it to drive in a sand point shallow well for the garden. 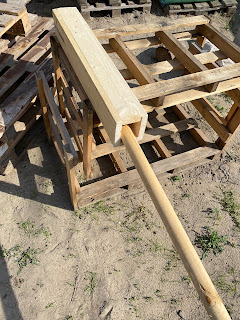 Start with a 15 cm piece of a square fence post - larger than the diameter of the stake that you want to drive in.  Build a box around it such that you have a channel of at least 50 cm below the block.  Strap a heavy weight above the block and there you are.  It doesn't have to be ridiculously heavy.

Obviously a steel thumper will last forever, while a wooden one will eventually wear out/split, but a wooden one like this, will last long enough for use by ordinary mortals.

Do sand the wood down to avoid getting splinters in your hands while using it. 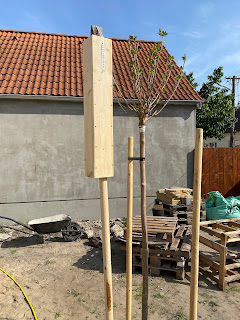 Put the top of the post into the thumper, then stick the point into the ground and raise it up.  Bonk the post in by raising and dropping the thumper 30 cm or so.  Wedge the post with your foot to help it go vertical.

Removing the thumper from the post can be tricky, since it is unbalanced with the big weight at the top, so it will likely drop onto the ground as soon as you clear the top of the post - try not to drop it on someone's foot!

For driving a Sand Point Well Pipe into the ground, I built a tripod gantry with two pulleys, to make it easier to lift the thumper.

Here is a picture of the pipes about 2 meters into the ground: 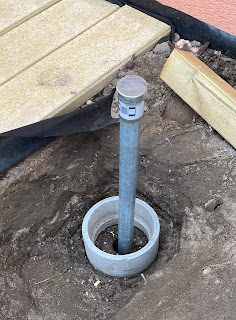 I'm sure the neighbours will be happy when I reach the end of my pipe.

Speaking of heavy stuff. I built some heavy gates and needed to drag them about 20 meters from the garage to the corner of the yard and my back was getting sore. 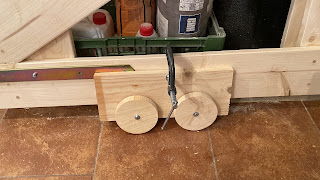 So, I re-invented The Wheel!

It only has to work twice. 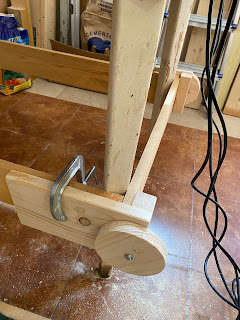 The above wooden wheels turned out real good, so I made a couple more, to clamp on and drag random heavy things around, such as my work table - which is an old recycled kitchen table with strengthening around the legs.

Now I can tip it over and then just need to balance it a bit, when I drag it off to the storage area.  I may cut another pair of wheels and screw them to the table permanently.

For something that won't get hundreds of miles of use, scrap wood wheels are great and cost nothing - OK, you need a screw and two washers also, but that won't break the piggy bank. 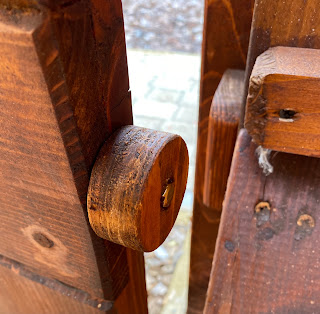 The roller and block (with a rounded corner) lifts the door a few mm, so that the sliding bolt lines up perfectly, making the gate easy to open/close.  Don't glue the block - use two screws instead.  When the system needs adjustment, unscrew the block and reposition it.