I have been playing with the SATNOGS earth observation satellite system for a few years, but since I am still living in the desert, the climate is against outdoor activities, so its been a bit low key. To work on an antenna on the roof, requires a hat, black sunglasses, a wet T-shirt, a wet towel, a litre of water and a big black umbrella and after that I'm broiled for the day...

The few times I tried to download a weather picture, it actually worked, despite having seemingly more noise than signal.  An RTL-SDR or HackRF One receiver really needs to have a low noise RF preamplifier for best results.  There are several solid state, one transistor preamp kits available that one can buy and build in an evening and stick on the antenna cable, but why do something the easy way, if one can do it the hard way?

I recently made a 'simple' (!?) power supply for a Magic Eye cathode ray tube VU meter and the same power supply circuit can be used for a one valve RF receive amplifier. 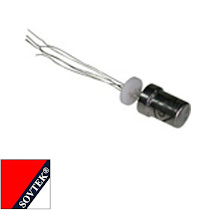 Small Sovtek 6CW4 Nuvistor
(Whatever you see on your screen is about life size!)

A problem with garden variety glass thermionic valve amplifiers is that they do not work at VHF or UHF frequencies.  The big glass tubes are good for an electric guitar at baseband and shortwave radio, but not much beyond 50 MHz.  However, there are special, low noise metal and ceramic valves, that were designed for this purpose and one can get small triodes that work up to 3 GHz.

Although these parts were in common use for about 30 years in TV receivers, most people don't know about them, because they are small and don't look like a vacuum tube. They look just like a metal can transistor, but with too many leads and instead of a silicon crystal, there is a vacuum inside! 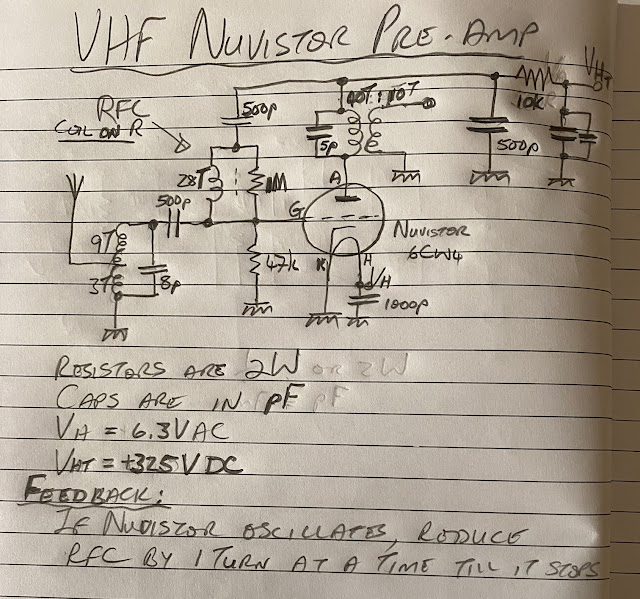 The above circuit should work for a 146 MHz weather satellite, using a 6CW4 Nuvistor triode.  I got a handful from my favourite Electronics Junque Store in Russia.

Since these tubes are very small, the internal parasitic capacitances and leakages are small.  Therefore, they can be used with either Grid leak biassing, or with Cathode biassing.  They behave almost like a NPN transistor, or a N-channel FET.

Electron tubes are very forgiving - just feed it some lecce and see what happens.  I have never managed to blow up a tube. It would require very special skillz to smoke a vacuum tube.

Circuit design for Audio is different from design for RF.  Audio circuits need to be linear and wide band over multiple octaves at base band.  RF circuits need to be narrow band and reject signals both lower and higher, to reduce the noise and improve the SNR.  For this reason, audio circuits are biassed with resistors only.  Capacitors are used to stabilize the power and provide a slow roll-off to high frequencies to prevent oscillations.  In RF circuits such as for the weather satellites at 136 to 137 MHz, the biassing and feedback are done with tuned circuits, to increase the Q and make the circuit narrow band.

Therefore, there are little coils that you should wind from magnet wire, but don't be scared of that, the designs are not critical.  However, don't put them right next to each other.  Try to keep them a little apart and at 90 degrees to each other, to minimize coupling.

Any RF circuit should be built as small as possible, to avoid problems with parasitic capacitance, inductance and coupling, but there is a limit to what one can do.  This circuit is about the highest frequency that one can still build successfully on a tag strip, but use a single ground point and use as few tags as possible.  A Christmas tree circuit with most parts soldered directly to the nuvistor is the best way to do it.  You will need some thin heat shrink tubing to prevent shorts.

Another way to do it, is to cut some squares in the copper of a single sided PCB with a Dremel cutting wheel and build a blob circuit. Use a square in the middle as the ground, with some smaller lands around it.  Drill some holes for the nuvistor leads and put it on the other side.  It would be best to sketch the physical circuitry on paper before you start.

Wind the RF Coils from magnet wire around a 1/4 inch drill bit and slide it off.  The input transformer matches a low impedance antenna to the high impedance Grid.  Wind the negative feedback RF Coil on top of the 1M resistor - the 500p capacitor  only blocks the high voltge DC.  The output transformer 40T:10T can drive a low impedance antenna cable. If the tube oscillates - remove one turn at a time from the 28T coil on the resistor, till it stabilizes (Less turns = more negative feedback = lower gain).

Be sure to use large 2 W resistors and high voltage capacitors, else you may get smoke signals. 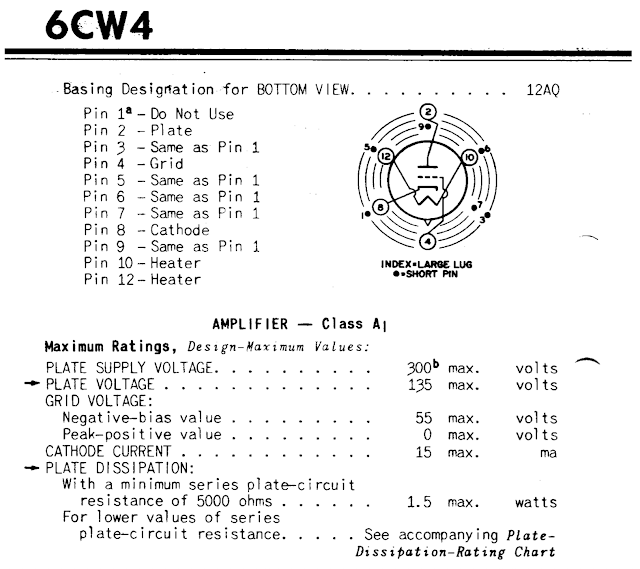 These little triodes were widely used in television sets in the 1960s and 70s, so there are millions of them still available.  The thimble size triodes are good up to about 1 GHz and they are not really any more difficult to use than a transistor - they just need a higher supply voltage and building the PSU keeps things interesting.

So, instead of the ubiquitous 2N2222 NPN transistor, you can use Nuvistors and amaze and confuse your fellow geeks when you hook a vacuum tube running at hundreds of volts to a Raspberry Pi or Arduino.

Well, now I don't have an excuse anymore and should grab the soldering iron and find a traditional old tobacco tin to house it in...