I have made a few PCB antennas and the Yagis worked well, but they were very narrow band.  So I tried to improve that by making the elements conical - or in this case, since it is 2D PCB antenna, triangular.
I think it is a fairly unique idea and I certainly haven't seen a picture of a PCB antenna like this before.  The Driven element and first director are flared to 3 mm (since there is no more space) and the Reflector and other Directors are flared to 10 mm. 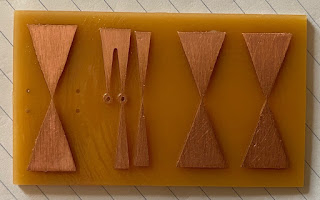 Wide Band Yagi with Unbalanced Co-ax Feed
I'll see what happens once the conformal coating dried and I hooked up a cable.
It is the same design I used before - I just flared the elements and left out the last 2 directors: 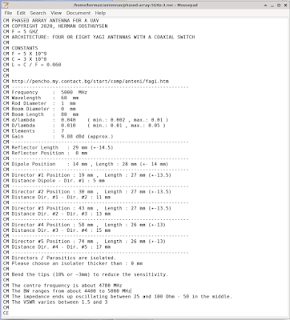 This way I can compare the two antennas with each other.  I didn't bother to simulate it - I just went ahead and machined it to see what happens.

Initial tests showed that the gain is about 5 dBi which is typical for a 5 element Yagi and the bandwidth of the new antenna is much wider than the conventional old one, which is very promissing, but I need to work on my RF cables, connectors and calibration kit, to get proper graphs, since the VNA seems to be out of calibration.
I don't have an anechoic chamber - I hold two antennas in my hands and rotate them 90 and 180 degrees to see what is going on - good enuff!

I eventually charged the battery of my VNA (Having decent power sure helps!), reread the manual and reset the calibration (Func Shift 7).  I also verified that there is no significant difference between Sys Cal and User Cal with my cables, so it is good to go. 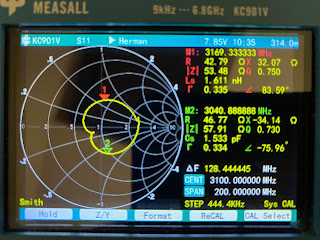 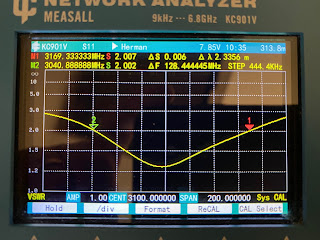 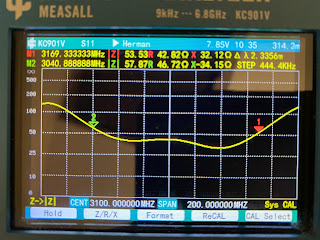 Bandwidth of 120 MHz at 3.1 GHz
For comparison, here is the previous simpler antenna with 1 mm wide straight elements: 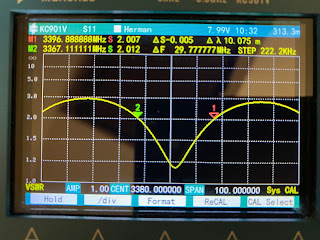 Bandwidth of 30 MHz at 3.38 GHz
A low VSWR is important for a transmit antenna.  Modern day radios have Gallium Arsenide semiconductor drivers that can get damaged very easily by high voltages.  The better radios have self protection circuits that will reduce the output power if there is a mismatch, but El Cheapo radios may simply heat up and melt down.
Vacuum tube radios can handle enormous voltages, so the old clunkers can simply be tuned for maximum smoke, but the missus may not want to have a hot and sizzling 1 meter tall Klystron tube in the living room, although it could be quite a discussion piece.  Travelling Wave Tubes are still used in some K band satellite transmitters, so vacuum tubes are not just ancient relics of microwave ovens!

Flaring the antenna elements to 3 mm and 10 mm does help significantly to widen the bandwidth of the Yagi antenna by 400% and it still has the nice linear Phase, VSWR and Impedance characteristics of a conventional Yagi, but the antenna is still quite narrow band, compared to a Log-Periodic antenna for example.
The centre frequencies are somewhat different, because the new one is made on FR2 and the old one on FR4, but I also plotted the new one more accurately in KiCAD.  To get a PCB antenna exactly on the frequency you want, will take three to five iterations.  That is just the nature of the game.
I think that the bandwidth can be further widened, by inserting cross pieces to make the elements more like cones.  Maybe I'll try a Conehead antenna another day.
Have Fun!
Herman
Posted by Herman J.H. Oosthuysen at 3:36 PM