When you need to test two radios in a lab, they are awfully close together and may not work over the air, since the transmitter will overdrive and saturate the receiver.  You may even damage the receiver since the radio front end is very sensitive and the transistor features are extremely small.  If you would accidentally touch the antennas of two radios together, you could instantly melt the receiver front end. 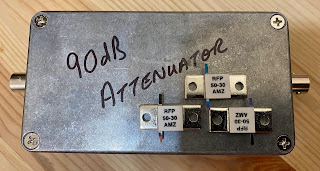 
Path Loss
If your transmitter operates at +30 dBm (1 Watt) and the receiver has a sensitivity of -90 dBm (1 nano Watt), then to work properly, you need a path loss of 80 to 90 dB, to bring the transmit signal down to a safe level of about -60 dBm.

You can then hook the two radios back to back, with coaxial cables through the 90 dB attenuator, without risk of blowing anything up.

One trick, is to hook both radios to 50 Ohm dummy loads.  They will then usually still work over the air for a few meters in a lab, due to leakage signals.  A wireless connection like this can be handy for software tests, since you don't need to run a cable over the table/floor, but it is not repeatable for accurate RF tests.

Therefore, every radio shack needs one or two attenuators and dummy loads.  If you go and look at the prices of these things on Pasternack, or Everything RF, you will see that they can be horribly expensive.  You may be tempted to build one, but building a good one from little SMD coils and capacitors that will work at microwave frequencies, is difficult.  Well, maybe not...


DIY Attenuator
The above picture shows my 90 dB attenuator, made from three 30 dB attenuator pads, that one can buy on AliExpress Bokon Store for about $4 each, or from Everything RF for a few bucks more.  So you can 'crook' and not actually build a T or Pi circuit - buy it as a little module and save yourself a whole lot of hassle and money.

Just solder three in series, add two connectors and an aluminium box for shielding and heat dissipation and Bob's Your Uncle?  No, not exactly... 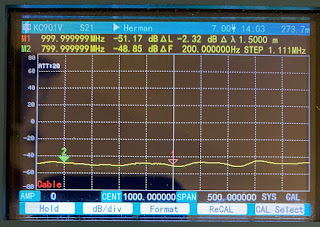 To get - 90 dB attenuation is very difficult in practice, due to leakage from the input to the output, inside the box.  My first attempt came in at about -46 dB attention. I eventually got it up to about -60 dB, with careful routing of the little coaxial cables and some copper tape inside the box.


To Measure, is to Know (sorta kinda):
When I plug two RG58U cables into my little network analyzer and leave the ends open, it measures -80 dB.  So with the cables I got, I cannot measure -90 dB.  I would have to get double/triple screened coaxial cables to really know what the attenuation of this little box is, since what I measure, is the attenuator and cable leakage in parallel.

To actually measure this attenuator, I would need to build two and hook them up in parallel, then measure, so that I measure a lower value more within the capabilities of my test setup.


Dummy Loads
I have in the past made quite a few crude dummy loads from 50 Ohm 10 Watt wire-wound resistors soldered to a BNC/TNC connector.  Some radios are OK with that, but some may not like it, since a wire-wound resistor is very inductive. 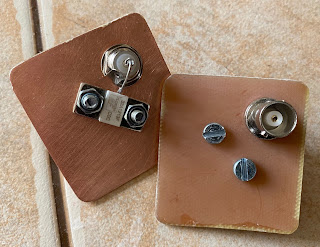 You can also get 50 Ohm thick film resistors that look much the same as the attenuator pads, to make accurate dummy loads that are not inductive.  Screw one inside a little box with one connector and there you are.  If it is an open construction like this, then they will radiate a little, which is sometimes useful.  The small piece of scrap PCB acts as a heat sink - good for a few Watts.
15 dB Attenuator

A Grey anti-static bag works as a RF attenuator.  The bag data sheet shows that it is a multi-layer composite with a thin transparent aluminium layer inside:

My measurements showed a 15 dB attenuation at 5 GHz when I put a bag over an antenna.  This is useful when two radios under test are too close together and you need to suppress the signal a bit, without changing the wiring to install/remove an inline attenuator.


It is Time, Gentlemen

One thing you got to remember though, is that an attenuator doesn't provide a time delay.  The speed of light is very fast, but not infinite.  Some radio modem protocols (WiFi) assume a turn-around time of a few nano seconds that may work in a lab - but not in real life over long distance.  This is why long range WiFi radio modules have adjustable turn-around timers, so that you can configure it for 100 to 200 km range.