For a few years, it has been possible to launch tiny educational satellites - for free - to fill up some of the unused payload space on big rockets.  http://www.asc-csa.gc.ca/eng/satellites/cubesat/default.asp 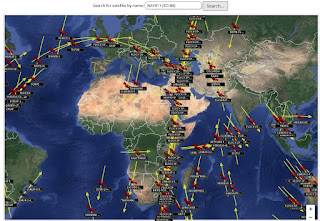 This opportunity has been used by many universities and radio amateur groups: http://www.asc-csa.gc.ca/eng/sciences/canadian-cubesat-project.asp

A few months ago, the American University in Sharjah also launched a cubesat called NAYIF-1: http://www.arrl.org/news/nayif-1-cubesat-to-have-funcube-transponder.

It has been passing overhead many times and I was a bit miffed that I did not know about it before the launch, had no idea how to connect to it and to my knowledge, the radio amateur law in the UAE did not allow foreigners to operate.  The NAYIF-1 satellite is a CubeSat-5, which is a little different from the CubeSat-1.

Here is the AmSat data warehouse for the NAYIF-1 (EO-88), which shows all the pertinent information on the satellite in real-time:
http://data.amsat-uk.org/nayif1/index.html 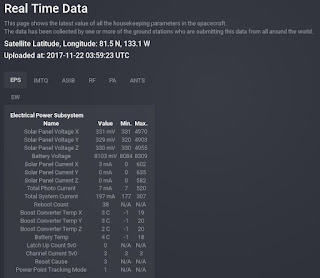 The final straw was when I learned that Russia and Slovakia launched three cubesats in the same week: 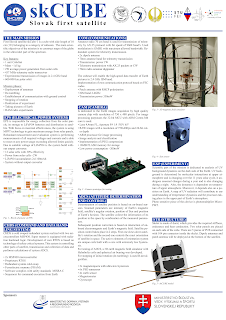 It turns out that in preparation for all this, the UAE radio amateur law was changed last year https://www.tra.gov.ae/assets/Le2rh2VP.pdf.aspx, a radio amateur society (EARS) was founded in Sharjah and expats are welcome: http://ears.ae/en/

The NAYIF-1 has a Funcube transponder, which has a beacon and a bent pipe.  Anyone can listen to the beacon (using the FunCube Dashboard Windows only software and matching SDR widget), but to send something through the transponder would require a ham license: http://wp.rac.ca/uae-satellite-will-have-amateur-radio-transponder/

The Funcube project is based in the UK: https://funcube.org.uk/

To connect to the NAYIF-1 (or other) satellite, you need to know when it is passing: http://data.amsat-uk.org/nayif1/index

To see all the cubesats currently flying, try this: https://in-the-sky.org/satmap_worldmap.php?day=4&month=7&year=2017&hour=10&min=50&show=sl&show=st  There are hundreds.  Which ones are actually working is another matter though.

To send data through a cubesat transponder, you would need a V/UHF radio, which could be an off the shelf SSB ham radio, or a Software Defined Radio specially built for this purpose: http://www.funcubedongle.com/

In practice, you need to know exactly when the satellite will pass overhead and then you have one or two minutes (depending on the height of the orbit) to bounce a message through the transponder before it disappears over the other horizon and then you may not see it again for several hours.

A new Yaesu/Kenwood/Icom/Xiegu/Alinco transceiver will cost around $800 to $8000, but you could buy a radio kit for $200 and assemble it yourself and end up with a similar high quality transceiver.

If you design the whole toy from scratch like I usually do, then it may take years to complete, it will likely end up costing $500 or more and the quality will be much inferior, but it will be a whole lot more fun to do and you could then say: This is a total piece of junk, it barely works, but I built it myself!

You could follow a somewhat easier path and build a ham radio kit, some of which are amazing quality and will look exactly the same as a factory built unit, but you could buy a second hand rig on Ebay for much less.

The best value kit which was refreshed recently in 2016, is BITX40, a 25 Watt, SSB, digitally controlled transceiver, built and tested PCB for only $60:
Due to the present low sun spot cycle, the 40 meter (7 MHz) HF band is best for long distance work and the BITX40 is ideal for that.  With the BITX40, you can chat to someone on the other side of the globe on SSB if you have a proper antenna (With a 15 meter flag pole and a tuner you can look very patriotic too!).

Very simple fun kits (which perform much worse and could cost more than the above!):

There are also crazy kits for ancient vacuum tube sets (for old fogeys like me), or little transceivers using only 7 parts that barely work, or radios built entirely from 2N2222 NPN bipolar transistors just because...:

Of course, someone then went and did the same with a radio built entirely from small signal PNP transistors!

A simple little radio can be much fun to chat to people around your city, but they are usually unstable and the transmit frequency will drift.  A good radio will lock on and follow a bad radio, so you can have fun provided that whoever you try to talk to has a good quality rig.  It will also help a lot if you run your fun radio off a battery and let it warm up and settle down for 15 minutes before you transmit.

A 7 Ah motorcycle battery is stable and has no noise and will make your toy work much, much better than a noisy unregulated wall wart and then you may be able to rag with someone hundreds of kilometers away on less power than a child's night light.

The best ham resources are probably the DXzone and ARRL web sites.

Here is a laundry list of Linux ham software and what they are good for:
http://www.dxzone.com/catalog/Software/Linux/

and this is for Macintosh:
http://www.dxzone.com/catalog/Software/Macintosh/

All the radioham utilities are available on Fedora, Ubuntu, Slackware, OpenBSD, Mac...  but you can also try Knoppix or Shackbox if you want to run off a USB stick without actually installing Linux on a machine.

Everybody associates ham radio with Continuous Wave Morse code and if you listen to the HF bands, then you will hear a lot of it.  CW with Morse was the first digital telegraph modem about 200 years ago.  However, nobody learns to send Morse any more.  I was in the Corps of Signals in 1982 and didn't learn Morse - it was already long obsolete.

However, if you want two data link radios to connect to each other, then they have to use the same modem waveform on both sides of the link and Morse is the 'lowest common denominator', which can even work with a friendly doddering OM (old man) or XYL (ex young lady) clutching a pencil on the other side...

There are a multitude of modem programs that run on common garden variety computers that send data via the sound adaptors.  The most common ham modem modes are RTTY, PSK31 and CW Morse - there are many, many others, but it doesn't help if you are the only one trying to use it, since it will make you feel very lonely.

The best modem program at the moment, which works on Windows, Linux, BSD and Mac, is FLDigi: https://sourceforge.net/projects/fldigi/

However, as with most software things, you need at least a half decent computer and any half decent computer works better with Linux or BSD than with Windows. The Windows scheduler is not good for real-time operation and therefore cannot do encoding and decoding very reliably since it stutters too much.  This is why you will see many disparate reviews of the same amateur radio software, with one bloke saying it works great and the next bloke saying it doesn't.  If you don't want any hassle, use a Macintosh (which runs a kind of BSD).

FLDigi and Satscape are the most fun you can have with your geek hat on...

Best of all, you don't even need a radio to try it.  You can install FLDigi and play through your sound system to hear first hand what it does, or even let two computers side by side, talk to each other over the air, never mind the ether!

The information on the NAYIF-1 CubeSat is scattered all over the place. Here is a summary of what I could figure out.

The AmSat web site for this satellite shows real-time information from the radio beacon:
http://data.amsat-uk.org/nayif1/radio.html

According to that, it is working fine.

The beacon can be received with the Windows only FunCube Dashboard software and matching SDR dongle.

It should be possible to get something with a RTL-SDR widget and FLDigi set to BPSK, but first I would like to see a power spectrum density graph, since I have no idea how the beacon data is encoded. It sends packets with error detection and correction, but I haven't found any useful details yet.

The transponder is a linear 'bent pipe', so one can send anything through it with a suitable 5 Watt transceiver, a right handed helical antenna and a modem program.

So to send/receive through it, one needs something like a HackRF1 SDR radio with fldigi and a 9 dBi RH helical antenna. This should be a generic AmSat setup that should work with any other amateur satellite transponders.

The orbital ephemeris data is available on the http://www.heavens-above.com web site under the name EO-88.

Have fun with the Funcubes!