Artificial intelligence is now used against human dissidents.  The NSA and GCHQ are using enormous computers to troll the networks and sniff out supposed terrorists.  There was even news that Russian systems use social network data to predict who are likely to be future trouble makers. 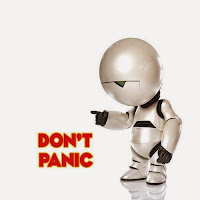 This is all due to a recent shift in policing from crime prosecution, to crime prevention.

In the interest of crime prevention, the bar has been lowered and to me, the really disturbing thing is not that these immature children are supporting terrorism - they have no clue what it really is - but that they are being prosecuted for thought crimes - they haven't actually done anything wrong yet:
26 May 2015: A 14-year-old boy has been convicted of terrorism offences in Austria, including a potential plot to bomb a railway station in the capital, Vienna.   A 16-year-old girl was facing charges in Vienna on Tuesday of supporting IS.

It is a fine line that we need to preserve between order and anarchy, dogma and freethought.  Now we also need to give thought to computers, devices with no wisdom or sense of morality, passing swift judgement on us.

Maybe one day we will be able to predict life so accurately that we can simply terminate a pregnancy proactively and avoid the whole child terrorist problem.