Modern passenger planes cruise at very high altitude and very close to their stall speed, flying on a knife edge, in order to minimize fuel consumption.  The problem is that when a plane encounters turbulent air due to a storm or a side wind, it can stall unexpectedly, while still traveling at high speed.

It appears to me, that in the relentless pursuit of lower drag and lower fuel consumption, the designers have compromised aircraft stability and safety.

The situation now, that a passenger plane can stall at 30,000 feet and then fall out of the sky, with the total loss of aircraft, crew and passengers, unable to recover despite the best efforts of an experienced flight crew, because the plane was designed to save every last drop of fuel, is inexcusable.

Aircraft designers should always put stability and safety first and should not be driven by marketing only.

Postscript
In October 2018, a brand new Boeing 737 Max crashed in Indonesia with great loss of life, because it had a new anti-stall feature that the pilots were not informed of.  The plane was forced down by the automatic system, due to a faulty AOA sensor and crashed into the sea, while the pilots were fighting the system for control - but the manual trim control wheel required super human strength to turn, as it was made smaller a few years prior in another unintentional bungle.

Postmortemscript
This is not good at all.  Another 737 Max 8 went down in early March 2019, with very serious loss of life.

Of course, Boeing maintains that their planes are perfectly safe, while a writer at Tech Republic called the Max the world's first Self Highjacking Plane - for its propensity to deliberately fly itself into the ground.

Even Prez Trump weighed in that planes should be simpler and easier to fly.  I think plane designers should take note - not only Boeing, everyone.

The result is that Boeing has hundreds of planes, that nobody wants to fly in and every month they add another 42 coming off the production line (From the Douglas Adams Book of Bistro Management), so their employee parking lots are now filling up with the unloved planes and by the end of 2019 they will have to park another 300 new planes somewhere in the desert, while all the employees will have to bicycle to work since there would be nowhere to park their cars. 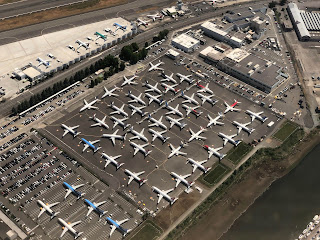 Airlines have the Max 8s stuffed at out of the way airports all over the world:
https://thepointsguy.com/news/heres-where-airlines-are-storing-the-boeing-737-max/

Boeing may go bankrupt because of the lost sales and law suits.
Just for future refrence, the 737-Max is now called 737-8 and 737-10 - maybe you want to check your boarding pass...