Now even the French is admitting to be going at it with no judicial oversight, just the same as the NSA and GCHQ and the Canadian CSE was found to misuse court orders granted for spying on citizens to allow other 5 eyes members to spy on Canadians on their behalf. 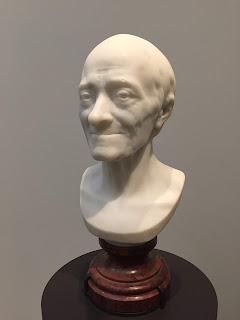 
The mass snooping is not working, it is not catching any terrorists, it is a gigantic invasion of privacy and a colossal waste of money and resources that could be put to work more effectively. Furthermore, the whole thing is beginning to backfire.  Cisco is losing orders for switch gear, Boeing is losing plane orders to SAAB, while Blackberry was abandoned by everyone after they subverted their own security and RSA is losing disgruntled customers since they sold their soul for 10 million shekels of silver.

There is no war and no state of emergency, but the intelligence agencies are acting as if WW5 is under way.  This overreach has to stop.

What the Western Allies have now created, puts the old Catholic Church, its confessionals and inquisitions to shame.

As Voltaire so eloquently put it:  Écrasez l'infâme!
Posted by Herman J.H. Oosthuysen at 8:23 PM