While touring through Europe, I could not fail to notice all the various styles of crosses displayed everywhere on countless steeples and memorials.  Most are obviously decorous, but one or two depictions struck me as being functional - with an engraved scale - but for what purpose?

Driving around in the green countryside of Bavaria, I thought of the various English proverbs:
Crossed, Double Crossed, Nailing a Philosopher to His Own Cross.

That last one made me think - a Philosopher's Cross - hmm...

Until medieval times, any learned man was called a philosopher and good philosophers learned pretty much everything there was to be learned.  The information explosion and the necessary specialization is a recent thing.  Ancient philosophers learned about astronomy and navigation, in addition to classic literature, logic and mathematics.

Knowledge of navigation was essential in ancient times not only for navigating at sea where the only features are the night sky, but also on land on the plains of Europe - especially in winter, where a miscalculation could mean a painful freezing death if you are trudging along and cannot find your destination village.

There weren't any confusing brown tourist signs in those days and inuksuks are a Canadian invention!


In the village of Lab in Slovakia, I saw a depiction of a philosopher carrying a light weight, but rather large (about a 1 meter long staff) cross and careful inspection of the painting showed some marks on the staff.  At last, a practical Philosopher's Cross.

The Cross Staff and Lode Stone

The cross staff could have one, two or three cross bars (though only one would be used at a time).  The staff was placed below the eye socket and staring directly into the sun, one could then measure the sun angle to the horizon, by moving the bar along the staff, until it touches the sun and the horizon and then reading off the value inscribed on the staff.  Better staffs had two or three cross bars, set at angles, to use multiple engraved scales on the staff.  Only one bar would be used at a time, but many churches show these crosses with all the bars installed - especially in Central and Eastern Europe.  Clearly, nobody now knows that it was a navigation instrument!

At night, the same method could be used to measure the angle of other well known stars, such as polaris.  The angle would give the philosopher his latitude and a lode stone floating on a piece of bark in a ceramic bowl of water, would act as a compass and the combination, would show him which way to go.  The whole process, would of course seem mystical and magical to commoners and a philosopher that could travel far and wide and navigate using the sun and other stars, was held in high regard.
O'l Ptolomy was even depicted holding a cross staff, some 1000 odd years before it was invented by Rabbi Levi ben Gershon (1288-1344) in France.

The cross staff, was in recent times replaced first by the back staff, a staff fitted with a little mirror and white board, which allowed the user to look away from the painful sun and later as technology kept improving by a more precise metal quadrant, followed by a precision metal sextant and nowadays, a GPS receiver in a smart phone.
So, how do you navigate with a cross staff / sextant and a compass?  It is actually not hard at all.  If the sea is unobstructed between you and the harbour you are going to, simply go north (or south) till you get to the harbour latitude (the sun angle measured by the cross staff, and the harbour position read from a navigation almanac), then head east (or west) according to your compass, until you see the harbour.  In practice, you would go zig-zag, with many sightings.  The navigation tables of the 17th and 18th centuries made it easy. Accurate clocks only came later - those made it possible to estimate your longitude.
Arabic sailors used a simplified pocket version: A piece of wood with a string through the middle.  They would bite the end of the string between their teeth and then measure the sun angle against specific knots in the string.  A knot indicated the angle of a port and when sailing regularly between the same two or three ports, they simply adjusted the knot each time they got there, or updated it based on a friend's who was there recently.

I also saw many a staff with a spiral and a jewel in the middle, as a prop, used with many statues and even the modern pope and his bishops like to carry one (though I doubt that they have the foggiest idea how to actually use it).  This jewel on a stick is the Philosopher's Stone, or a sun stone.

Two small statues with these spiral staffs and also one little painting with a functional cross staff, are in the twin tower church in Munchen.  That church is a particularly macabre place with the most horrific religious artwork on display - it looks like a place where Stephen King would go, to get inspiration for his horror novels.

A sun stone, was a rare piece of feldspar, with parallel thin crystals, causing it to polarize light (just like a pair of Polaroid sunglasses).  When traveling in the extreme north, a polarized filter can indicate the position of the sun below the horizon.  Inscriptions on the spiral, helped the philosopher measure the sun angle by looking at streaks of polarized light high in the sky while slowly revolving the stone.  The philosopher could then navigate accurately using the sun, even when the sun was invisible.

My father was an amateur geologist and collected stones. He had one of these and told me that it was used in medieval times for navigation, but he did not know how it was used exactly.  I played with it, but never thought of looking at the sky through it. 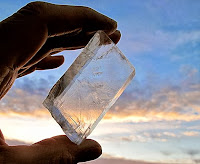 If you live in the far north of Canada or Norway, give it a try with your polarized sunglasses.  The streaks in the sky will be something else to look at besides the Aurora.

Apparently, a sun stone was also useful to accurately find the sun on a cloudy day, so it is also a bad weather navigation tool, not just for use in the far north and probably prevented many a Viking ship wreck.

Statues of learned men included the props of their trade: A book (showing that he read classical literature), a cross staff (showing that he was an astronomer and navigator) and later, a telescope (like the statue of Lord Nelson).  I haven't seen a statue holding a GPS receiver yet, but maybe one day...

Nailing a Philosopher to His Own Cross

Nailing a Philosopher to His Own Cross, is a proverb indicating that the philosopher was refuted, but one cannot possibly nail a person to a cross staff - the thing is too small, light and fragile.  It is a metaphor only.

So, coming back to that well known religious icon nailed to his own cross, the blood, guts and gore.  The simple fact is that the Romans did not nail people to crosses - it is too complicated to make one that would be strong enough.  They impaled people on a stick, same as Vlad III Dracul did with many thousands of Turkish invaders in Romania in 1462.

The mythical icon, was only metaphorically nailed to his cross, but to make a practical statue, the light weight cross staff had to be made much larger and totally impractical and now we have tens of thousands of people wearing macabre navigation icons around their necks, with hundreds of gothic churches displaying gory icons on decorous cross staffs with one, two or three cross bars all uselessly mounted at the same time, while precious few actually know where it all came from.

Nailing a philosopher to his GPS would maybe put an interesting new spin on things.
(The little pictures are borrowed from all over the web - thanks to whoever took them - maybe one day, I'll upload my own).