Three hops between you and the Gulag

The motivation that the NSA uses to justify its data trawling is rather disturbing.

In testimony on 18 July 2013 before the House Judiciary Committee, National Security Agency Deputy Director Chris Inglis said that the NSA’s probing of data in search of terrorist activity extended “two to three hops” away from suspected terrorists. Previously, NSA leaders had said surveillance was limited to only two “hops” from a suspect.


What do they Record?

The NSA records *everything*:  Metadata, Email, Chat and Voice.  They only ever talk about metadata.  The rest of their activities are cloaked in weasel words.  For example, the chief of the NSA insists that they only analyze meta data and if it proves interesting, then they will get an order to retrieve a phone call.  He is a weasel word expert - the best - that is why he got the job.

They can only retrieve the phone call if it was already recorded.  An example is the phone call analysis of the wife of the Boston Marathon bomber, which was retrieved for analysis weeks after the last faint echoes of her voice faded away into the ether.  So obviously they must be recording everything in real time.

New documents that were released in October 2013 showed that the NSA was actively tapping the phone calls of dozens of world leaders.  This is getting really sordid and looks like General Alexander "cyber stalking" the President of Brazil and the Chancellor of Germany. 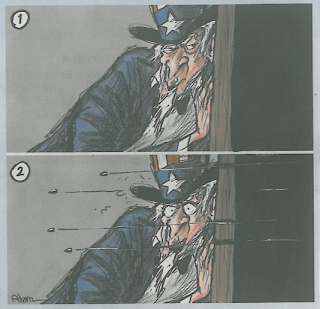 Of course the general is being set up as the fall guy and he already tendered his resignation effective next year, but the real culprits were the congressmen who approved the Patriot Act.  The general was just doing his job, but he should have known better - he is a grown up after all.

Consider that most of the readers are techo geeks and not travelling salesmen, lets say that you dear reader, talk to about 500 people.  So, Hop One will be about the number of people in a typical High School.  Now think about how many dope heads and rugby players that circle may include.

If we look at the CIA World Book, that number is larger than most European countries, larger than any one American state, or about four times the total population of Canada.

So what Mr Inglis in effect said, is that as soon as the NSA has a terr on the line, they will trawl through every active phone call in North America.

With a three hop search, you are guaranteed to be guilty by association to something - several somethings.  I can hear Senator McCarthy musing: "Mmmm, I see that a friend of your second cousin twice removed is a card carrying member of The Party... That is not good, Mr Smith...".

The problem with overly wide data trawling, is the amplified risk of errors, misinformation and false accusations.  In the UK, five people were falsely arrested due to bad computer information last year, 2012:  http://www.iocco-uk.info/docs/2012%20Annual%20Report%20of%20the%20Interception%20of%20Communications%20Commissioner%20WEB.pdf

Extrapolating from this single government report, we could infer 5 wrongful arrests in France, 5 in Germany, 1 in Canada and 15 in the USA.  Per year.  Every year.  Do you want to have your life ruined by bad computer data?

The data analysis problem faced by the NSA is similar to issues the medical profession faces where a cancer screening test that is too sensitive, results in misdiagnosis and ruinously damaging treatment of people who were actually perfectly healthy to begin with.  The damage caused by false positives far outweigh the damage of missed positives.

I am an ex-Army Signals Officer.  I have sworn allegiance to Her Majesty QEII.  For the life of me, I can't see how having huge rooms filled with thousands of semi-literate high school drop-outs like the infamous Mr Snowden, trawling through the email and phone calls of hundreds of millions of law abiding citizens, can possibly be a good thing. The odds are totally against such a system and we are the people on the receiving end of the inevitable errors.

This is ridiculous.  Something's got to give.


What can you do about it?

In a surveillance state, your only hope is to subscribe to Twitter and start following the Pope:
http://www.richarddawkins.net/news_articles/2013/7/17/-vatican-offers-time-off-purgatory-to-followers-of-pope-francis-tweets

Now go and install Redphone, Jitsi and Mailvelope to turn your communications black!
Posted by Herman J.H. Oosthuysen at 9:26 AM