Prologue
It is time to stop the crazy BS.
The epidemic was clinically over, when the governments closed the unused emergency hospitals, four months ago.  Since then we are just playing a weird political game with nonsensical 'statistics'.
There are far worse diseases that need urgent attention and investment (2018 death statistics):
More data here on the official Statistics Canada government web site: https://www150.statcan.gc.ca/t1/tbl1/en/tv.action?pid=1310039401
In Canada, even Stupidity (13,290), kills more people than Covid19 (9,829)
--oOo--
The Covid19 epidemic is over, but people are so scared, because of the exponentially exaggerated projections, that they now refuse to listen to reason, as explained in this video https://www.youtube.com/watch?v=gHbwAd5gkMM
A big problem is that the crazy-news media concentrate on the scary projections and ignore the real statistics.  Let's look at the USA CDC Covid19 death count report Table 1 - literally the cold hard facts:
https://www.cdc.gov/nchs/nvss/vsrr/covid_weekly/index.htm 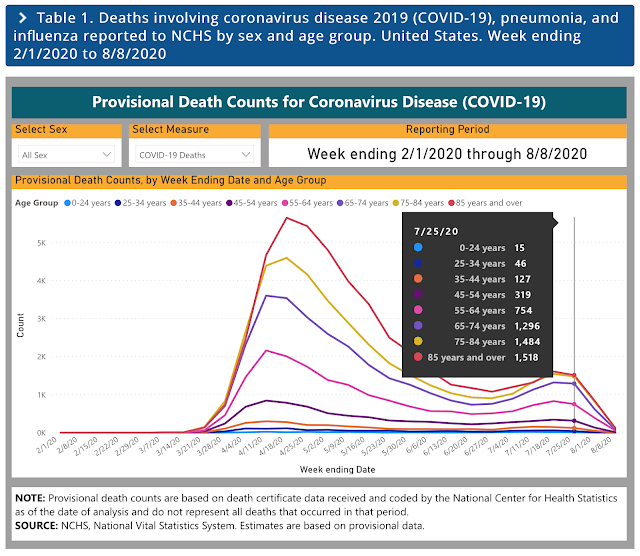 Over the hump
After the very vulnerable people sadly passed away, the illness continues to burn through the healthy population, the majority of whom will not get seriously sick, the death rate keeps going down and is now around 1500 per day, which is very low compared to the peak.
Every week, you can go back and look at a new version of this graph and every week you will see that it doesn't go back up, it just keeps going sideways.  It is a very boring graph and in this case, boring is good.
In the US, even the president is not allowed to point out publically on Twitter that children are almost immune to the disease, as shown clearly in the CDC graph above. The whole thing is terribly politicised there and the Democrat mass media controls the narative, science be damned.
The death rate is independent of the infection rates, so loved by the crazy-news papers.  There are no strong peaks in the table when the infection rates climb, NY stopped their lock down, political rallies broke the lockdowns, etc, meaning that all the preventative measures have had little to no effect on the death rate. 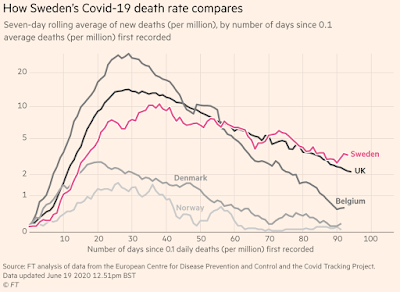 Sweden with no lockdown, had lower slopes than the UK with lockdown.
This disease is extremely contageous, it is in the air, it is carried by pets and other mammals.  It is in our food supply https://news.sky.com/story/coronavirus-outbreak-at-sandwich-factory-as-nearly-300-staff-test-positive-12048597 and the expensive lockdowns were not effective.  It may have prevented some healthy people from being inconvenienced, but it did not prevent old and sick people from getting sick with Covid19 and dying of it.  Deaths are only prevented by medical intervention and treatments in hospital.
The lockdowns clearly did not 'flatten the curves' - the disease carried on spreading - Sweden's curve is 'flatter' than either Belgium or the UK, while many Central and East European countries have so few deaths, it is in the noise floor (Slovakia with 5 million people, had 30 deaths in total).  The disease is clearly only a problem in South-Western Europe and the Americas - the rest of the world is largely immune to it - probably due to a different immunization regime.
Lockdowns are even worse than not helping, since many people died because of the lockdowns for reasons such as hunger and lack of medical treatment of other conditions:
https://news.sky.com/story/coronavirus-lockdown-may-have-indirectly-caused-16-000-excess-deaths-study-12044923
Graphs for every country in Europe look the same.  The graphs go up steeply and come down slowly, just a few weeks earlier in time, compared to the US.
In the England and Wales in the UK, the Covid19 death toll decreased for the 20th consecutive week and is below the Infuenza death toll since June 2020:
https://www.ons.gov.uk/peoplepopulationandcommunity/birthsdeathsandmarriages/deaths/bulletins/deathsregisteredweeklyinenglandandwalesprovisional/weekending31july2020 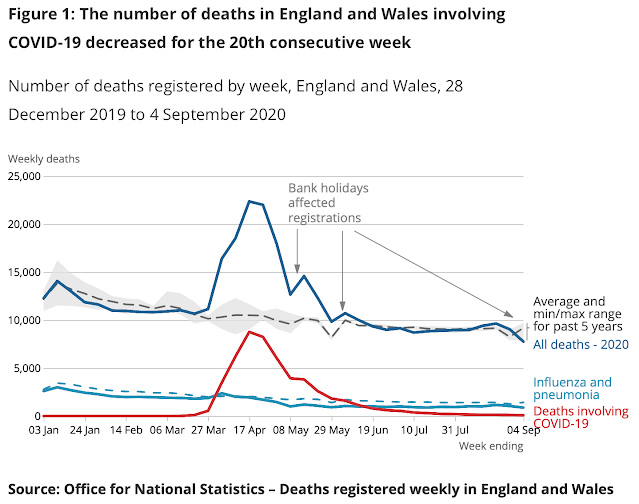 In Europe, Covid19 is fish paper - yesterday's news.
North America is not far behind Europe and indeed,  for the past 3 weeks, deaths from all causes in the USA was also below the expected.  See Table 1, Percent of expected deaths:
https://www.cdc.gov/nchs/nvss/vsrr/COVID19/index.htm
These graphs are updated once a week by the CDC.  One cannot argue with this data since it is not predictions, it is real stone cold deaths.  Normally, deaths are dispiriting, but in this case, the contrast is so stark with the wild exponential predictions, that it is actually encouraging and unlike James Bond, people only die once.
Of course, once the death rate bounces back up to normal, the crazy papers will tell of the second coming of Covid, while the near zero bumps in the curves are really because all the vulnerable people died a few weeks/months earlier than they would have without Covid19.
Lately, there is news in Europe about a second wave of infections.  We shall see what happens in two weeks with the death counts, after the Grim Reaper walked by.  My hope is that there won't be many, since this wave is amongst younger people - and guess what, weeks later, the death rate just keeps going down.
More information on real numbers vs scary exponential projections, done by people in the insurance industry, who wanted to know what would happen to their businesses if people really started dying in droves as the projections indicated: https://www.pandata.org.za/
"The death rate is inversely proportional to the amount a country spends on health care."
This conundrum is due to the disease disproportionately affecting older people (80%).  Poor countries don't have old people - they die young, since they don't invest in health care.  There is also some new research coming in on Covid19 vs age and immune system T-cells (old people have fewer), which may explain the problem and lead to new treatments.
Here is a graph that Americans are not allowed to see.  If you are American, please close your eyes and don't peep: 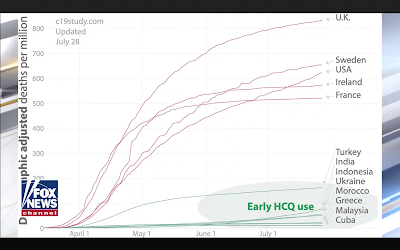 According to the BBC, more than 50% of Mumbai slum dwellers already had Covid19 and the death rate is about 1 in 2000, or 0.05%, which is so close to zero that one cannot graph it - you will only see the x and y axes with nothing in the graph:
https://www.bbc.com/news/world-asia-india-53576653
Send the children back to school, they will be fine.  The older teachers may have a worry, but not the children.
Why is Boris Johnson wearing a mask?  He already had the illness.  Apparently he forgot.
It's over folks.  Light a candle for the lost souls and move on.
--oOo--
The Weekly Virus
According to these BBC graphs, the relationship between the scary case numbers and actual deaths, is clearly very weak. 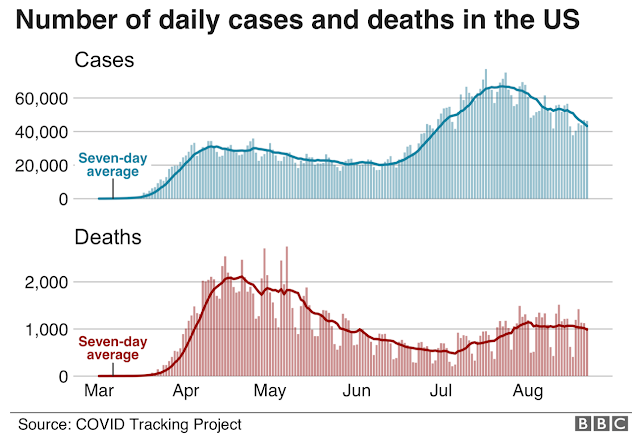 The main take-away appears to be that if you need to go to the US, schedule your business over a weekend and you will be safe...
The testing system clearly doesn't work properly, produces very large numbers of False Positive results and is therefore mostly a waste:
https://www.globalresearch.ca/lies-damned-lies-health-statistics-deadly-danger-false-positives/5724417
--oOo--
Further reading:
Calling Bullshit
The Art of Scepticism in a Data-Driven World
Jevin D. West (author), Carl T. Bergstrom (author)
https://guardianbookshop.com/calling-bullshit-9780241327234.html
--oOo--
Dear lord, please save us from the Crazy Doomers...
--oOo--
Vaccines
Specific vaccines are now in the test phase:
https://www.thenational.ae/uae/coronavirus-more-than-10-000-sign-up-for-abu-dhabi-vaccine-phase-3-trial-1.1054211
However, an old stalwart, the BCG vaccine, seems to be almost as good (about >80% of deaths are prevented) and it is available right now. 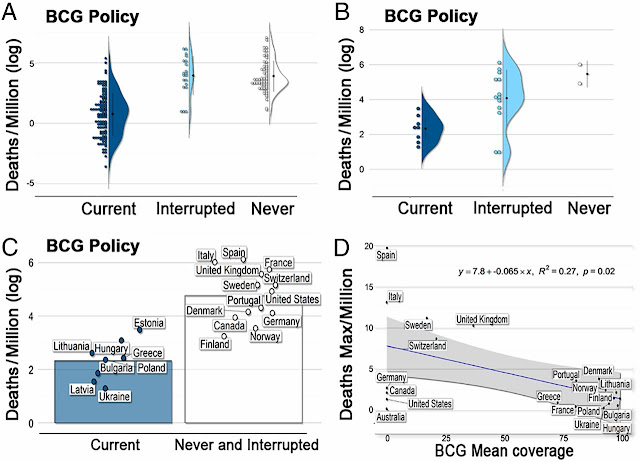 Luis E. Escobar,  View ORCID ProfileAlvaro Molina-Cruz, and Carolina Barillas-Mury
PNAS July 28, 2020 117 (30) 17720-17726; first published July 9, 2020 https://doi.org/10.1073/pnas.2008410117
So if you don't have the TB vaccine marks on your left shoulder, maybe you should get it: https://www.sciencedaily.com/releases/2020/07/200708121433.htm
A little googling will find more results, since several BCG tests are now drawing to an end, but the result is obvious to those who care to look at the death rates in Eastern Europe: 30 in Slovakia, 600 in Belarus, meaning that more people die per day in the USA of Covid19, than in six months in these countries.
--oOo--
BCG Vaccine
Stop worrying and get a BCG shot:
https://www.pnas.org/content/117/30/17720
MMR and Polio Vaccines
Not only BCG, the MMR and Polio vaccines also help to reduce the severity of Covid19:
https://www.parsemus.org/covid-19/
All of these studies indicate why the countries that skimped on primary health care, are doing so badly.
--oOo--
Covid19 was only a problem in about ten countries in the world, which doth not a pandemic make.
Type this into Google: "covid deaths slovakia", or any other European country, to get a nice graph.  Note that Slovakia is exactly in the centre of Europe:

That number 6 is really six, not six thousand, or six hundred, just six.  Most of Europe looks similar.
--oOo--
PS - The Second Coming of Covid
The European and American politicians and news media are all in hysterics about a second wave: 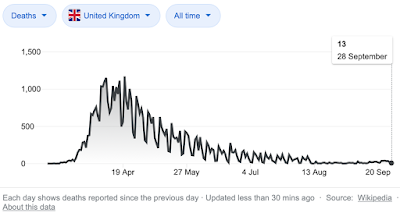 Sorry guys, but it just ain't happening.  Even the weekend bumps have subsided.
The problem is that the unreliable tests created a wave of false positives.  Something may be brewing, but the data is not reliable.
--oOo--
PPS - The BS Pandemic
I can smell a pandemic of law suits coming because of this nonsense:
https://www.globalresearch.ca/video-the-corona-fraud-scandal-crimes-against-humanity-corrupt-agenda-international-class-action-lawsuit/5725776
--oOo--
PPPS - Forced Lockdowns
Even the World Hypochondriac Organisation (WHO) now advises against lockdowns, since it doesn't actually do anything to curb the spread of disease:
https://www.news.com.au/world/coronavirus/global/coronavirus-who-backflips-on-virus-stance-by-condemning-lockdowns/news-story/f2188f2aebff1b7b291b297731c3da74
“Lockdowns just have one consequence that you must never ever belittle,
and that is making poor people an awful lot poorer,”
-- Dr. David Nabarro of the WHO.
Ozzies are also clueing in:
https://covidmedicalnetwork.com/about-covid-medical-network/declaration-statement.aspx
Sweden, Switzerland and Belarus are now vindicated, but freedom of speech and scientific discussion are still actively suppressed by the (il)Liberal media:
https://www.foxnews.com/media/alex-berenson-covid-mask-wearing-scientists-censored
--oOo--
Please don't let the Hypochondriacs run the Asylum again.
Ignore the crazy unscientific predictors of doom.
Don't make a mountain out of a mole hill.
Get all available vaccines.
Enjoy life.
La voila!
Herman
Posted by Herman Oosthuysen at 8:41 PM